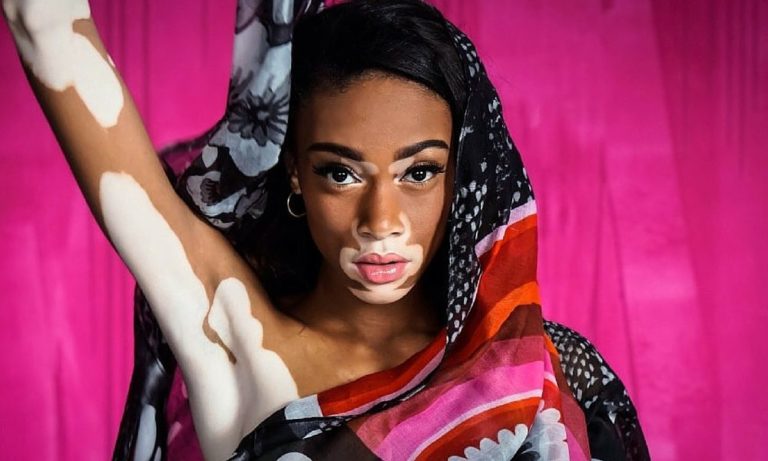 Model Chantelle Brown-Young, who goes by the name Winnie Harlow, has walked the runways at New York Fashion Week (NYFW), appeared in ad campaigns, and promoted a message of self-love and body positivity through social media.

But this year, the 24-year-old made history by becoming the first model with vitiligo to be cast by Victoria’s Secret. She’ll walk the runway with the other Victoria’s Secret Angels in November.

Vitiligo is a condition that causes the loss of skin color in blotches that can appear on any area of the body, including the hair. Harlow has previously made it clear that she is not a vitiligo sufferer, but that she is “a vitiligo model” who is “succeeding.”

And succeeding she has been. She appeared on America’s Next Top Model, gained an Instagram following of millions and had many different modeling opportunities.

The Toronto native shared an emotional Instagram post after finding out she was cast in the show. In the post, Harlow recalls her nerves during the casting.

“I had a break down before I walked into the most nerve wr[acking] casting of my life,” she recalled. “I asked my driver to go around the block twice before I could walk into the @VictoriasSecret offices so I could re coup [sic].”

The model continued that when it came time for her audition she “walked for her life.” She then thanked everyone for their support in her journey. “Thank you for giving me all the energy and kindness in that room … Thank you mommy for praying with me every day for the past three days. And thank you so much to my fans who have been pushing me forward to this point in my career.”

In the video, she breaks down and sobs when she finds out that she has been picked. The moment was especially special as she had tried out for the 2017 Victoria’s Secret Fashion Show but didn’t make the final cut.

In an exclusive interview with Vogue confirming her casting in the latest show, the model discussed diversity and the importance of representation. “Why is there a stigma around being different when we’re all different?” she asked.

“Representation is so important, and I want to [stand for] all women,” she wrote. “Every single woman.”

A Plus has reached out to Harlow for comment.

Hormones Can Change Your Skin Tone

New hormone-based treatments might be able to treat conditions that alter skin pigment, such as vitiglio

As far back as the ancient Greeks, people have documented a funny phenomenon among pregnant women: The skin on their faces sometimes changes color. Scientists never quite knew why that happened, though they suspected that it was linked to the spike in the body’s hormones during pregnancy. Now, a new study published this week in eLife found that two sex hormones, estrogen and progesterone, play a key role in regulating the body’s synthesis of melanin, the substance that gives skin pigment.

To test the relationship between hormones and skin pigment, the researchers administered doses of the hormone estrogen to a 3D array of cells designed to mimic the structure of human skin. The longer the cells were exposed to estrogen, the more melanin they produced; after four days, the cells produced up to 300 percent more melanin than before they were exposed to estrogen. The researchers did the same test with progesterone (a synthetic version, progestin, is in oral contraceptives), which the body also produces during pregnancy, and found that cells decreased their melanin production when exposed to that hormone.

That was intriguing, since the melanocytes (the cells that produce melanin) don’t have traditional hormone receptors.

When the researchers took a closer look at the molecular pathways, they discovered that the hormones activate special pathways in the melanocyte cell membranes that tell the cell to create more or less melanin. To test their hypothesis, the researchers eliminated those receptors from the cells and found that the hormones no longer changed how much melanin they produced, as they predicted.

This discovery could lead to treatments for skin pigment conditions such as vitiligo, in which skin loses pigment because melanocytes are destroyed. It could also help researchers develop non-toxic ways to alter skin tone for cosmetic purposes, like making a person look tan without exposure to UV rays or paler without using damaging bleach on the skin.

In fact, the researchers isolated one of the melanin-increasing compounds and applied it as cream to the inside of mice’s ears for three weeks, which visibly darkened their skin. What’s not yet clear is if these sorts of creams would have any side effects—for example, on fertility—if used on humans.

In future studies the researchers hope to investigate more pathways through which hormones can affect cells’ melanin production, according to a press release.

What Type of Acne Do You Have? Types of Acne Explained

Login to Skinive
Reset Password
Enter the username or e-mail you used in your profile. A password reset link will be sent to you by email.